My first night I walked about 5 minutes to Baranjska Citadela. It serves food from the Baranja region of Croatia in the far eastern part of the country. I ordered ćobanac, a beef and dumpling soup with a spicy paprika broth. I envisioned my Polish grandmother standing at her wood burning stove tending to the soups she made. I drank a beer brewed in the same region, Osječko.

In a park not far from the main square (Zagreb has many green spaces.), 20 or more hamburger restaurants were grilling all kinds of fancy fare. Burgers with black truffles, with white truffles, with a Jameson whiskey sauce and who knows what else tempted hungry tourists and locals alike at a Burger Festival. My burger, along with a locally brewed stout, made for a delicious lunch.

Based on a recommendation from Kristina, our walking tour guide, I visited a small local eatery near the square called Heritage; small as in 2 tables, 5 stools and no toilet. A winner of Best Chef of Croatia and a couple of his friends opened a tapas-like place that uses only ingredients made and grown in Croatia. The food was so good that I went there twice. The server explains the origin of each ingredient in each tapa you order. I drank a tasty artisanal beer and a glass of blackberry dessert wine there, as well. Click on the tapas’ photos to learn the ingredients.

Kulen, a spicy sausage, grilled sour peppers and cream cheese (but different than the US)

Sour cherry jam, cream cheese (but different than the US) and walnuts

Another wonderful restaurant in my heighborhood (menu only in Croatian) introduced me to čufta–which is meatball in Croatian–a large minced pork patty topped with melted cheese and bacon. Good thing my diet doesn’t begin until I get back to Mexico. This meal was also accompanied with a dark beer, Korlovačko crno. Crno means black. 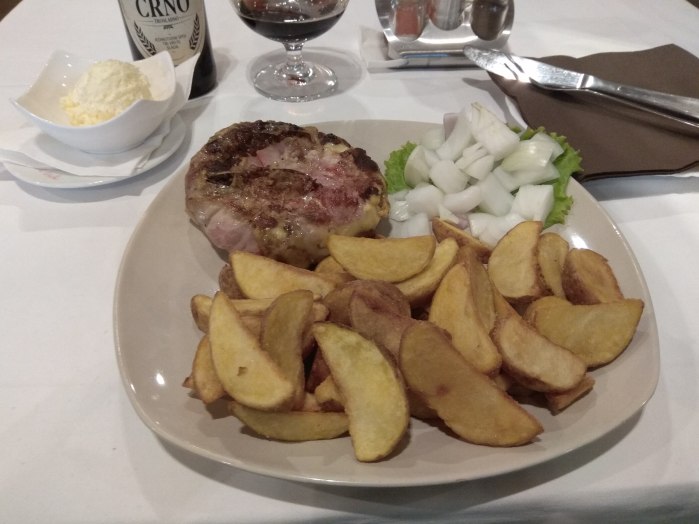 I ate my favorite meal today. It rained all morning and it was quite chilly, but I knew I had to go out to find something to eat. As I was leaving, my host Izidor told me he had made some soup and would I like some. He didn’t have to ask twice. It was a savory bean and barley soup with homemade bacon. He offered seconds and I readily accepted. What a great way to end a week at my Airbnb!

I encountered an interesting practice at a few restaurants, all of them in my neighborhood, not the tourist area. Here’s an example: I ordered spaghetti bolognese at an Italian restaurant near my house. On the receipt pictured below you can see that I was charged for both the spaghetti and the sauce. It was not a surprise; it’s listed that way on the menu. If I had ordered penne, I would have been charged 12kuna instead of 14. And carbonara was a different price than bolognese. 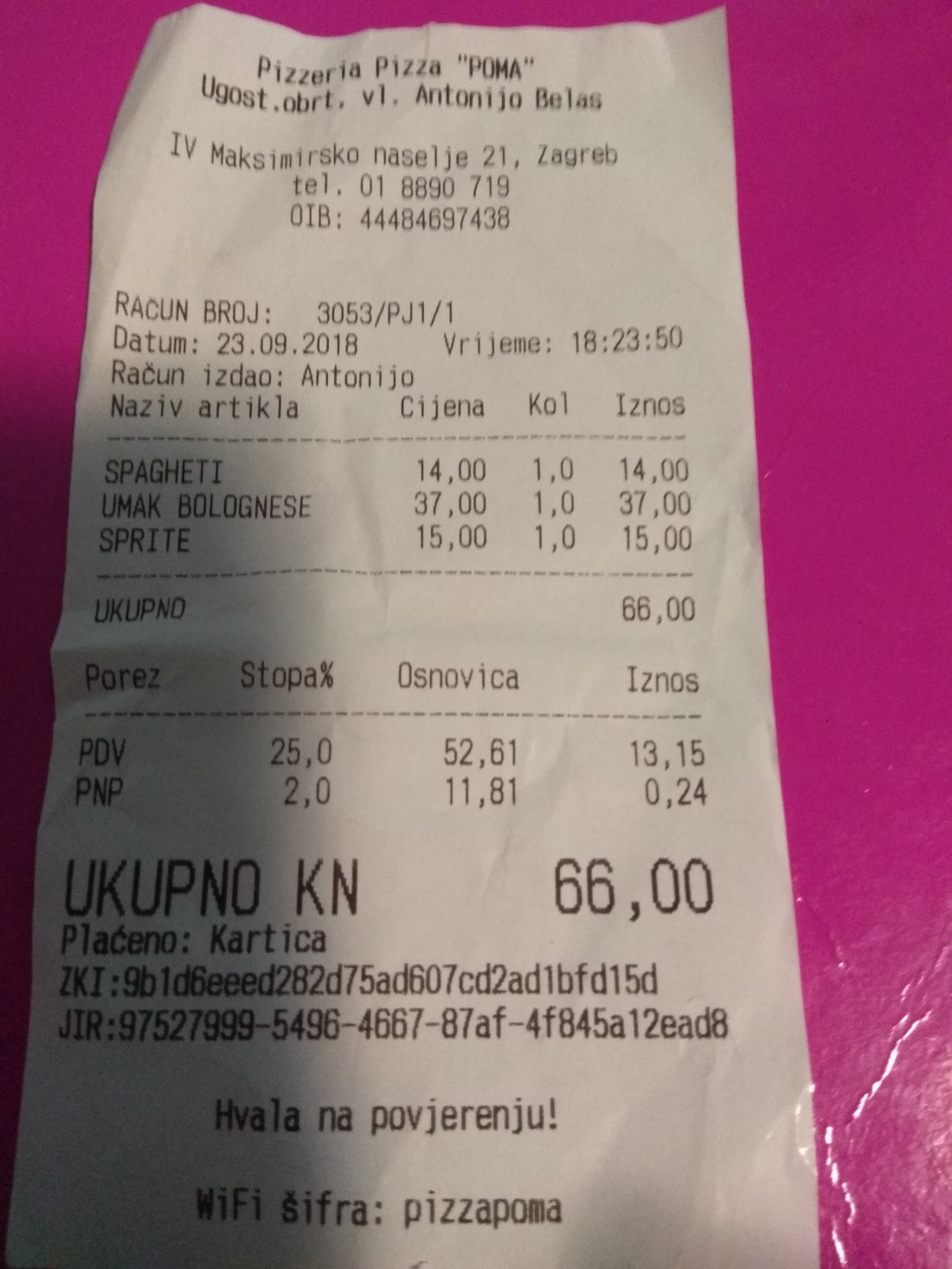 Tomorrow morning I take a 2.5 hour bus ride to Ljubljana, the capital of Slovenia. I’m excited about the week I’ll spend there. Not sure what’s up after that.

One thought on “Zagreb – Food & Drink”